When he was at the table with them, he took bread, blessed and broke it, and gave it to them. Then their eyes were opened, and they recognized him; and he vanished from their sight. (Luke 24:30-31)
When you take pictures these days with your cell phone or if you’re old-fashioned and still carry around a camera, unless that camera is more than ten years old, when you take a picture, your camera is looking for faces. Our cameras are programmed to search out and identify the human face. When the camera locates a human face, it puts a little box around it . 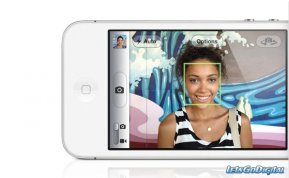 How does your camera know that you are taking a picture of your baby, your mother-in-law, and not a rock or a tree. It’s all in the math. Through a complicated set of equations known as algorithms, the computer chip in the camera searches out a certain arrangement of shapes: eyes, nose/mouth and head.

The computer chip processes  light coming in on the lens of the camera, makes these calculations and tells you it’s a face, a human face, and automatically helps you focus on that face before you go take the shot. 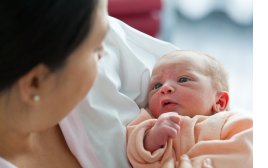 Researchers at Stanford University have used brain monitoring techniques to demonstrate that facial recognition is one of the first human capacities to develop. They have shown that infants brains can process facial patterns almost as accurately as adults.  “Mama!!!!!!!”  This is quite astounding, because while the infant can recognize the face, the infant’s visual system is otherwise not very developed and cannot recognize other basic shapes. We are hardwired to recognize the human face.  And that is essential to our survival.

Friday evening I was eating at the local Chinese take-out joint. A man walked in order to his food, turned around and looked me in the face. Our glances went back and forth; we sized each other up, and we did that dance of recognition. It took a while but we went from some vague recognition to aha! – John! – yes  – Scott – yes.  Asbury Church – yes! 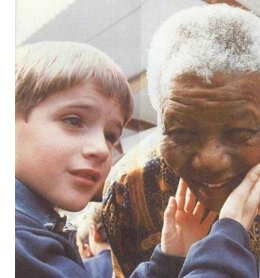 To recognize a face – to be recognized as yourself – this is a deeply embedded, profoundly important dimension of our humanity. Those of us who are sighted do this with our eyes; those who do not have sight do it by voice or by touch. Every occasion in which we are known and recognized or we recognize another person we are touching upon a very sacred dimension of human experience.

In the story in Luke’s gospel where Jesus and the disciples on the Emmaus road and the disciples do not recognize who he is. Tere comes that critical moment; it happens when they are seated with Jesus at the inn; Jesus takes a loaf of bread and breaks it; suddenly they recognize him.  There is that flash of recognition.

In the story, it is at that moment that Jesus vanishes, vaporizes; he disappears.  He breaks the bread, then he is gone.

This is a puzzling story.  Jesus disappears the moment he is recognized.  There is a riddle in this.  While they are with him the do not recognize him; the moment they do recognize him is gone.

There are other times in the gospel when Jesus asks people to recognize him.  When he takes the child in his arms, he says when you receive one such child in my name you are receiving me.

In the gospel of Matthew he tells the parable about the final judgment of the nations. In this amazing parable there are two groups who face judgment. One passes the test. To this group the Lord says: “Enter into the joy of my kingdom; I was hungry and you gave me food, I was thirsty and you gave me drink, I was a stranger and you welcomed me, I was naked and you clothed me, I was sick and you visited me, I was in prison and you came to me.” They are puzzled and they say, “But we never saw you hungry or thirsty or naked or sick…” The Lord answers, “When you give it to the least of these my sisters and brothers you did it to me…”

Again and again the Gospels raise this question, where do we see Jesus? How do we recognize Jesus? Where is Jesus present among us? Where do I see the face of Christ?

In the story of Jesus walking with the disciples on the Emmaus Road talking with them, for they are oblivious; they do not recognize him – when they turn off the road to rest at the inn, I see this inn as the church.  When they are at the table with Jesus, and Jesus takes the bread, I believe that the gospel writer is pointing us to the Eucharist the Lord supper. When the bread of the Eucharist is broken then there comes the recognition on the part of the disciples that they are in the presence of the Lord.  He disappears, yes, but the bread remains.  This I believe is the gospel writer’s affirmation that for the disciples of Jesus, Christ is present when they gather and break bread.  I see this as a Eucharistic story, as an affirmation of the living presence of Christ in the life of the church.

Next Sunday will be a special Sunday in the life of our congregation.  It is going to be Caroline Ross Day.  It’s not easy to have a special Sunday here in your honor. Caroline achieved this distinction through surviving Civil War and genocide in her native Liberia, making her way to a refugee camp in Ghana.  By a most improbable set of circumstances and the intervention of a truly remarkable person, she not only found her way to a new life in this country; at the same time she received a series of complex surgeries to correct a rare disfiguring condition with which she was born, Orbital Hypertelorism, where the eyes are separated and the nose is not fully formed. 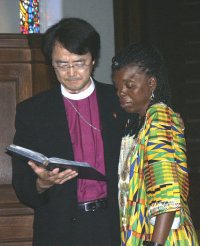 Some of you will be meeting Caroline for the first time. Others of you have followed her saga since the summer of 2004 when to of our church members, Joan Mallory and Janet Arbucci, traveled to Ghana as part of the mission team, and in a refugee camp for displaced Liberians they saw Caroline’s face.

Jesus said in that great parable in the gospel of Matthew, “As you did it to the least of these my sisters and brothers, you did it on to me.”  When Joan and Janet encountered Caroline she was surely the “least of these. ”

She saw the person.  She saw the person there.  It was that simple sacred moment of recognition from which unfolded a most amazing story of healing and hope. Now we as a congregation have the privilege of celebrating this journey and helping to complete the process that began 12 years ago, and to support Caroline as she launches off on her own.

Caroline comes to us at a time when there is a refugee crisis of staggering proportions. I am grateful to Pope Francis what he did this week  – going in person to the Greek island of Lesbos — the front line of Europe’s biggest refugee crisis since World War II — challenging Europe for its treatment of refugees and migrants, returning to the Vatican with twelve Muslims from three Syrian families under his protection. 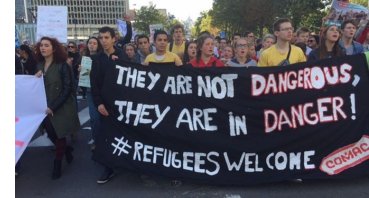 It is a symbolic gesture on behalf of the more than 1 million refugees from the brutal conflict in Syria and Iraq.  It is also a direct challenge to our nation to take an active part in the care and resettlement of these persons, and in resisting the bigotry and callousness of some of our politicians and political candidates, some who even would have us go so far as to deny entry into this country to any Muslim refugee.

Grace and peace to you.